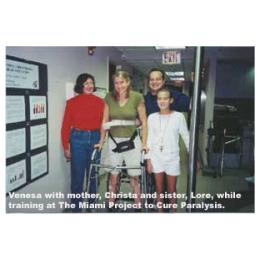 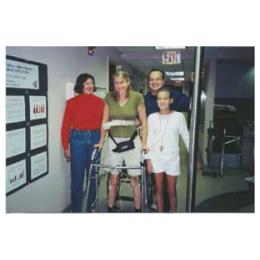 Parastep User Experience and User Profile
My name is Vanessa Jones and I sustained a T-6 SCI in 1988 in a moped accident while traveling in southern France.  I first heard about the Parastep in 1992, while a student at the University of Miami.  At the time the Parastep was being tested at the Miami Project pending FDA approval.  I decided to become a research subject and ended up being part of the Miami Project Parastep project for almost 2 years until I moved away.
In 1998, the system having been FDA approved, and after long deliberations on my part, I decided to acquire my own Parastep system.  It was one of the best decisions I have ever made!  Now living in Washington, DC, the Parastep has become an integral part of my life.  I work with a therapist about 1-2 times a week, and I can’t imagine not working with the Parastep as part of my weekly routine.
One of the reasons I hesitated before purchasing the system was the price.  But for me it was a matter of reevaluating my priorities and realizing that what I really valued was my physical and psychological health.  I also wondered whether I would be able to make enough use of the Parastep to warrant the investment.  Maximizing the benefits of the system does require a commitment from the user.  If you are interested in acquiring the system, you need to be sure you will have someone who can spot you when you walk (only very good walkers can do so unassisted, and I am not one of them), and you also need to be aware that it takes time to set up, walk and then put away the equipment.
I finally decided to purchase my own system because I realized that it was the best thing I could do for my body and long-term health.  I really enjoyed the work out with the Parastep from my Miami Project days, and I was missing this experience.  Benefits include reduced spasticity, improved muscle tone, and increased upper-body strength and endurance.  Psychologically, I experience an increase in energy and an overall improved sense of well-being – the same things everyone feels after exercising.
When I first began using the Parastep again in 1998, I was curious as to how my legs would react, not having walked in several years.  I was thrilled to see that I did not have to start from ground zero again.  It appeared that my leg muscles had retained a lot of what they had learned when I first used the Parastep.  While I still had to build up my strength and endurance, I did not have the problems getting my steps coordinated as I had experienced the first time around.  I also remembered a lot of techniques in terms of how to move my upper body and swing my hips.  Nevertheless, while I made progress, I felt that I had reached a plateau in terms of how far I could go without either my upper body or leg muscles getting tired.  However, one day (and it literally happened over-night), I walked further and longer than I ever had before.  Since then, I have been able to maintained this level of performance, even when I have not walked for a week or two.  I don’t know exactly how I broke through the barrier, because I did not do anything different, I just continued to adhere to the exercise program.  My persistence paid off, though, because I feel that now I am using the equipment more optimally, and, consequently, my feelings of personal satisfaction and accomplishment are greater than ever.
For those of you considering purchasing the system, don’t be frustrated if it takes several months or up to a year, to feel that you can walk with a smooth gait and without getting fatigued quickly.  Unless you can invest the time to walk almost daily, your progress will be slow.  You will make progress though.  I wish you the best of luck!